When I was a kid, there were two things you could always count on during summer vacation, two months of no school work and the dreaded summer haircut. I grew up in the 70’s where being practical was actually a hair style. We didn’t have Justin Bieber or the Kardashians for fashion advice, we had the Brady Bunch and a set of barber clippers. I say barber clippers but these multi use tools could also be used on animals and if needed, even out your shag carpet before company arrived. They were bulky, rarely oiled and only used a few times a year. I think the very last time my dad used them on me they became less like clippers and more like a thousand tweezers pulling out my hair in rapid succession. I know, I know, it builds character. My dad lived for the summer haircut. He loved it so much he even gave me a nickname when the sheering was complete, Butchy. Oh yeah, it was as awesome sounding then as it is today. I even had a t-shirt with that name inscribed on the back. No kidding. The great thing about the summer buzz cut was um, well there was nothing great about it unless you were a sheep, but since I didn’t make it a habit to wear a sweater on my head, it was just an opportunity for me to get sunburn on my scalp the first week of summer. The good news is that most of my friends had the same hairstyle. The bad news is that removing all of ones hair exposes head imperfections to all said friends. Another perk of the cut. I think my dad’s thought process was something like this, “If I cut off all his hair now, it will grow back in time for school pictures in the Fall and I won’t have to take him to the barber all summer!” Like I said, practical was the hairstyle of choice. I think the “summer cut” is a right of passage for men, passed down generationally by fathers to their sons. To this day a metal chair placed in the backyard and the hum of a set of clippers can instill fear in the strongest of men.

When I think back to those summers long gone, there were some advantages to the summer cut. For example I could go almost the entire summer without my mom telling me to fix my hair. I could go a week without washing, well, anything. FYI the hair is a dead giveaway to your mom as an indicator on bath night. My haircut kept me cool all summer, it was easier to wear a ball cap and at the park I blended in with all my friends. Come to think of it, life was a lot simpler during those buzz cut summers. I pretty much didn’t have a care in the world. Of course I’m older now, I have responsibilities. Summer is just another season of paying bills and going to work. Simpler times. Easier times. Of course, I don’t have sons to pass on this tradition. It makes the summer months a little less fulfilling.

Then I got a dog.
And it’s a boy.
And he requires a lot of grooming.
And this is our first summer together.

I think you see where I’m going with this. My girls wanted me to wait to have him groomed because we had family visiting. They left a few days ago and to the groomers he went.

My kids are horrified, my dog is happier without all the extra hair and I’m feeling a little nostalgic. Maybe it wasn’t as bad as I remember. Maybe the summer cut is a gateway back to a time of fun in the backyard and endless summer nights. It seems my life has gone full circle.

You know what? I might even start calling him Butchy Jr,
but just for the summer. 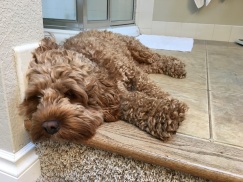 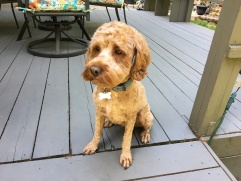